« Back
Project Link
SNS
Twitter
« Back
Project Link
SNS
Twitter
Basscube
Participated Grant
$ 2
Community Contribution
0
Rewarders
2
Community Votes
Vision
Problems: Most musicians don't get fairly paid in today's music industry, which can be mainly reflected in three aspects: 1. Streaming revenue model favors free audience: If a musician fully owns both sound recording and composition copyrights of music, each play on such music can only generate around $0.003 for him on Spotify. 2. Inefficiency of royalty chains: Between a musician with his fans, multiple royalty chains normally involve 2-5 middle organizations. These royalty chains are black boxes, which can cause significant royalty disputes, delays, and deductions. 3. Lack of Ownership of music In the past, people own their music assets, such as CDs and tapes. Owners can resell their music assets. Digitalization makes music no longer an asset. Streamings can not store or transfer value as a physical copy does. For example, the signature cannot be signed on a stream. There is no collection value, and it's not tradable.
Description 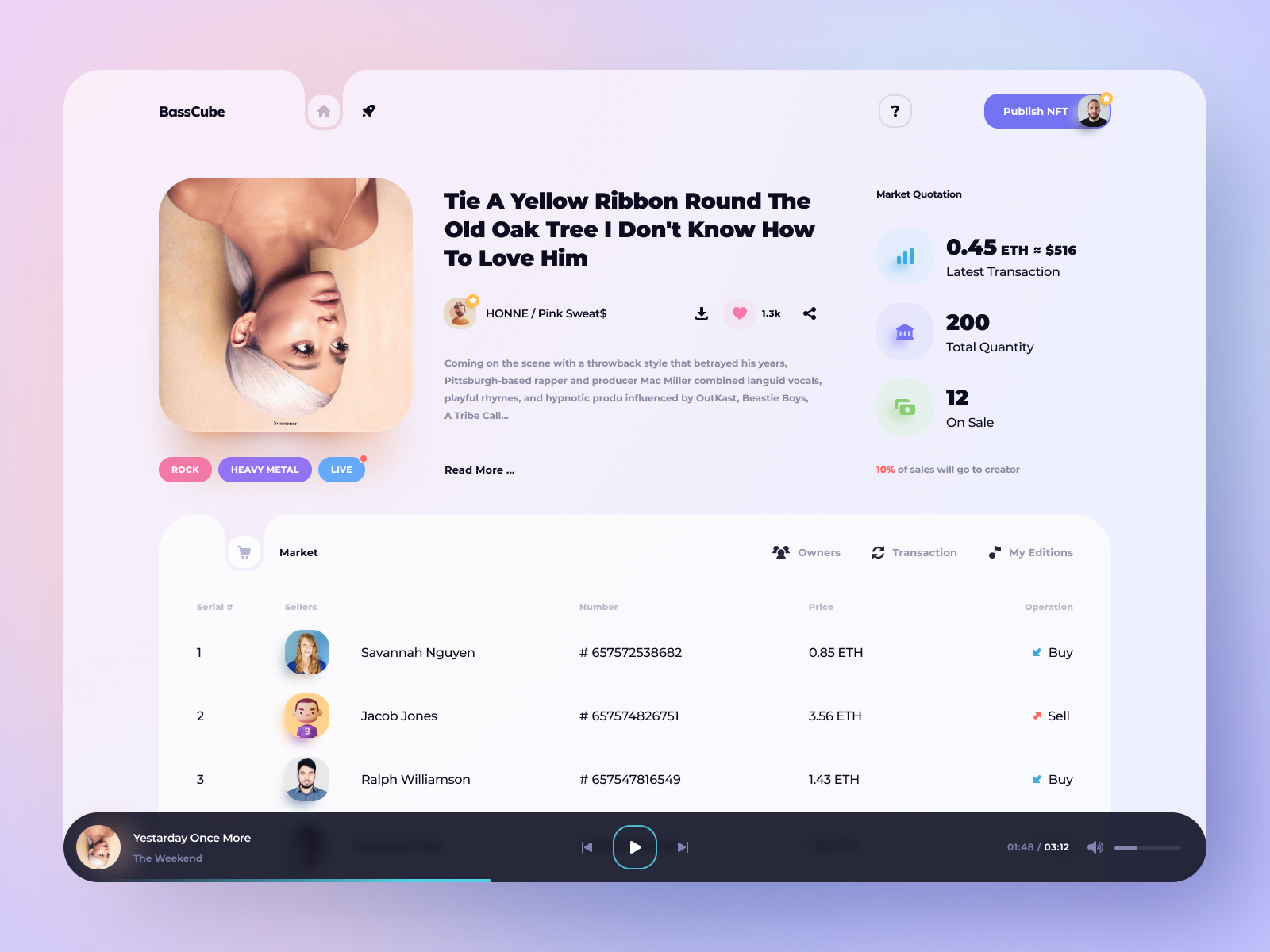 Our project is incubated by the University of Southern California. We have over 300 artists who agreed to launch their music NFT on Basscube. Their aggregated fan base is currently over 16million fans now.

We recently won 1st place in NFTVisionHackathon hosted by Circle and IPFS. We developed the onramp solution and currently iterate our design and develop interactive solutions.

Our solution to previous problems:

1. Basscube offers musicians the ability to take back control of pricing, earn sustainable income even with a small group of fans, and create truly special content for their biggest supporters. We also provide unique data metrics and a comprehensive data pipeline to let artists identify, connect fans who are most willing to spend on their work.

2. Basscube allows musicians to take back control of their work with direct-to-fan sales, instant payments, and transparent, trackable royalties.

3. Basscube's NFT technology enables fans to own and invest in the content they love, benefitting both musicians and fans as content grows in value.

Darren Cheng: Co-founder and previous CTO of Zhoutong Technology, leading a team of 80 people with $15 million raised from Kwai and Weibo. Darren is a USC graduate with a master’s degree in Computer Science, specialized in AI and Blockchain fields. After graduation, Darren worked for the unicorn company, Houzz.

Jae Deal: USC professor who is an award-winning composer and music producer. Jae is a featured musician on the release of Ty Dolla $ign. He was the curator, music director, and producer of a Jammcard event that honored George Clinton and featured Ice Cube, Cee-Lo Green, Anderson Paak, and Flea. Jae has worked with prominent artists including Janet Jackson, Lady Gaga, Snoop Dogg, Diddy, Ne-Yo, and Wynton Marsalis and more.